Clifford was only nineteen when he first stepped through the doors to his local Ashley and Martin clinic. For his age, Clifford’s hair loss was extremely advanced. Not only was his fair hair sparsely populated all over his scalp, but he had a distinct recession in his temples. The overall effect was the hairline of a man twenty years his senior. It had taken just one short year for Clifford’s hair to reach this concerning state.

It was not a surprise to Clifford that he had lost his hair; both his father and grandfather had also gone bald. But he was young and wanted to enjoy his twenties with hair while travelling, building his career and hopefully meeting that special someone. Having heard about Ashley and Martin both online and on television, Clifford sent an enquiry through Ashley and Martin’s online contact form.

The consultant he met with conducted a thorough scalp examination and took Clifford through exactly what treatment would entail. Photos were taken of Clifford’s hair to be able to track any changes that occured.

Ready to act immediately, Clifford signed on the dotted line and was booked in to see the clinic doctor and provided with everything else he needed for the entirety of his program. And although he was not diligent in going to the clinic for laser therapy treatments, he was diligent with his medication routine at home.

After four months of treatment, Clifford sat down with his consultant to discuss the progress he was making on the program. New photos were taken to compare to the ones in his initial consult. The changes to Clifford’s initial Norwood III vertex loss were dramatic and he was excited to know that his balding had stopped. His hair looked thicker and Clifford had already become confident enough to style his hair with products now. 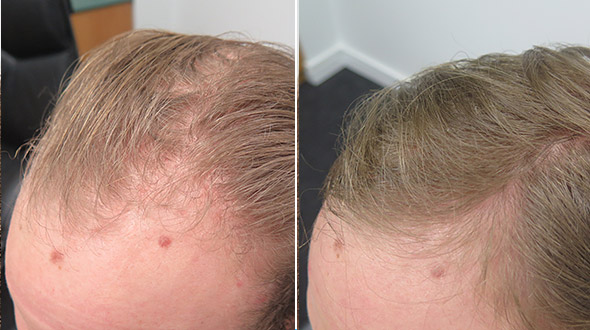