Checking his hair every day, Andy* could not tell if his hair had increased in density or thickness since he had started using an at-home Low Level Laser Therapy device to regrow hair. But once he compared the photos of his hair that had been taken from every angle today and twelve months previously in his initial appointment, Andy could see the difference his LaserPlus Pro treatments had made. Whilst his hair had been diffuse and thin all over, the photos in front of him showed a substantial amount of regrowth, with his hair regrowing thicker than it had been previously.

Sixty-eight years old and having seen the Ashley and Martin ads on TV for years, he had decided to contact his nearest clinic online when he realised he was no longer able to style his hair the way he used to two years previously. A matter of weeks after this realisation, he had met with a hair loss consultant and taken his advice on using a personal laser therapy device; he had seen what male pattern baldness had done to his brother’s hairline and knew he had to act quickly or risk the same happening to him.

Surprised and pleased to see how his hair had improved since using the LaserPlus Pro, Andy knew he had made the right decision in trusting an industry leader in hair loss to guide him in the right direction to regrow hair after 60. 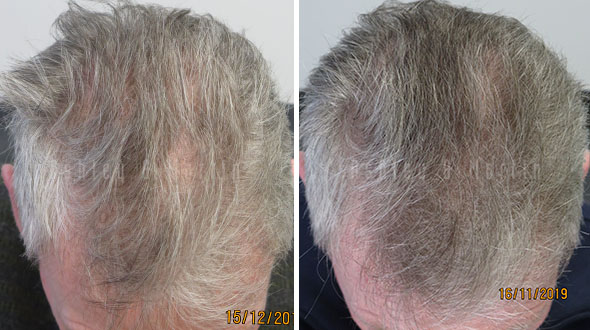