His thinning hair was not something Reyansh* had given much thought to until recently. However the comments about the amount he had lost had started to roll in. First a friend and then a family member. Knowing other people thought it bad enough to mention it to him prompted Reyansh to contact Ashley and Martin.

It was not that he was unaware of treatments for hair loss. It was more that he was extremely skeptical of the efficacy of them. A fact he brought up with the Ashley and Martin consultant Reyansh met with. Understanding that skepticism was natural with so many ineffective products and dishonest companies touting promises they could not keep, the consultant did his best to put Reyansh’s mind at ease. Showing Reyansh before and after photos of clients who had been in a similar position to himself, the consultant explained why the Ashley and Martin RealGROWTH® program worked and had the independent testing to back up the results.

Pleased to hear it was not too late to help him with the aggressive hair loss that had ravaged his hair over the past four and a half years, Reyansh decided to give the RealGROWTH® medical hair regrowth program chance.

Meticulously following the instructions his consultant and the clinic hair loss doctor had given him, Reyansh performed his daily treatment routine at home and attended the clinic for laser therapy treatments. And it was only a matter of weeks before he saw the pay off. After his hair fall slowed and returned to a natural rate, fine new hair began to grow from previously dormant follicles in the sparsely covered areas.

As part of the program, Reyansh’s progress was monitored with regular check-ups and photographs. At the sixteen week mark, Reyansh’s Ashley and Martin Review appointment confirmed what he and his family had been witnessing happen. His hair was regrowing. Progress photos in front of him showing the vast changes he had undergone since starting his RealGROWTH® Reyansh commented that he had been surprised how easy the treatments had been to do each day. He felt it was just a shame that his skepticism had prevented him from coming to see Ashley and Martin earlier. 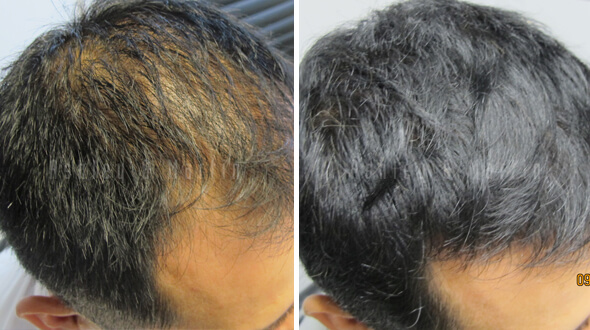