Paul had been amazed by the results his brother had received from medical hair loss treatment when he had come to Ashley and Martin. So to Paul, Ashley and Martin were the obvious solution when he started to lose his hair himself. At the beginning of his hair loss, Paul had only been experiencing accelerated shedding for the past few months. But as soon as he noticed it he knew he would need to do something about it. Concerned about the reduced density occurring across his crown, Paul used the online contact form to request an appointment at his local clinic.

The consultant was sure to establish that Paul was aware of all aspects of the treatment program once male pattern hair loss was confirmed. Paul was able to show his knowledge of each aspect of the RealGROWTH® program through the discussion and, confident the RealGROWTH® medical hair regrowth program would work as well for him as it had for his brother, Paul signed up for treatment straight away. He was provided with all the non-prescription items, booked for his first laser therapy treatment and prescribed his medication in an appointment with the clinic hair loss doctor.

Although he had watched his brother’s progress on the program with interest, it surprised Paul at how quickly he got the results he had been expecting. New hair had quickly grown, filling in the concerning areas across his crown and increasing the density of his hair all over. The hair loss gene passed down from both grandfathers and his father had been stopped in its tracks this generation. The brothers would be the first men in three generations not to give in to male pattern baldness. 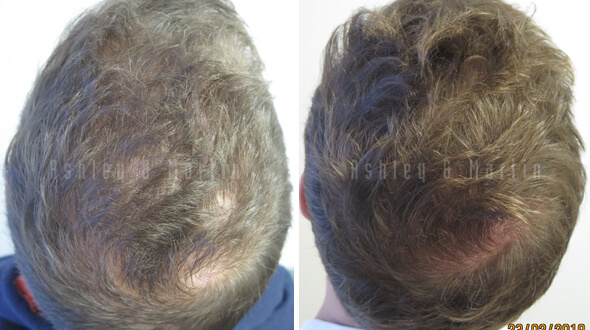