At first Madikh* had attributed his hair loss to the water in Australia. With his father not having any problems with hair loss and not having seen any changes to his hair before moving to Australia, it had been a logical assumption as this had been a major change in his life after emigrating. He had tried an over the counter product that was available back home, however it had done nothing to stop his hair from continuing to fall out. After a year of watching the hair gradually disappear from his temples through to his crown, Madikh turned to the internet to find and effective hair loss treatment.

Examining Madikh’s Norwood level IV-V hair loss, the consultant knew two things. Firstly, the pattern of loss he was seeing was consistent with androgenic alopecia, more commonly known as Male Pattern Baldness. Secondly, Madikh had been losing his hair much longer than the 12 months he had thought. Chatting with Madikh, he explained that the damage he was seeing had taken place over a minimum of five years; many people do not notice the subtle, beginning stages until the loss was visible to others. Discussing his family and medical history further, Madikh realised that four out of five of his maternal uncles actually did have hair loss to some degree.

Making the decision to use a modified version of the RealGROWTH® treatment program, Madikh booked an appointment with the clinic hair loss doctor to move forward with treatment. Finding Madikh to be fit and healthy, with no underlying medical conditions impacting his suitability for the program, the doctor prescribed his topical solution.

And although Madikh had opted to try and reverse some of the damage done to his hair without one of the major prescription components of his program, with strict adherence to his treatment regime, including weekly laser therapy appointments, substantial regrowth began to occur. Increasing the density of his hair all over and reducing the visible loss through his temples and crown within 18 weeks, 38-year-old Madikh was impressed with the beginning phase of his treatment. 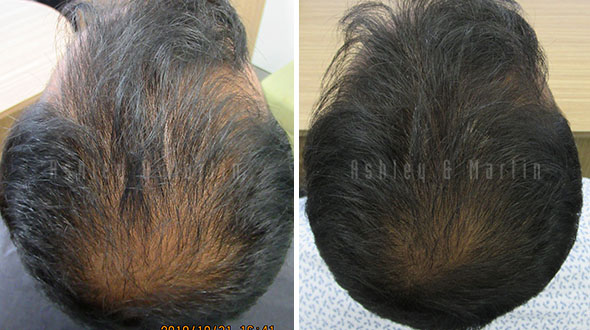