Giovanni* was uncertain, but he thought he may be thinning in the crown. Unsure if it was even possible for him to be losing his hair at 20 years old, he wondered if he were just being paranoid. Deciding to book a free consultation with a company known for being experts in hair loss, Giovani had nothing to lose by asking someone else’s opinion.

Attending his first consultation with a family member along for support, Giovanni was genuinely surprised at the amount of hair loss he was seeing in the photos the consultant had taken of his hair. His hair had become much thinner than he had realised. The consultant explained the hormonal process behind male pattern baldness and how his hair follicles were not only heading to dormancy, but miniaturising as well, leading to thinner hairs as well as diffuse coverage. And that it was a process that would continue to degrade his hair as time went on. Stunned and needing time to process what he had learned, Giovanni decided to take the photos and information he had been provided with and go home to talk it over with the rest of his family.

Several weeks later, having researched the validity of the information he had been given in his initial Ashley and Martin appointment, Giovanni had accepted the truth of what he had been told. He was suffering the early stages of male pattern baldness and medical hair loss treatment was the best way forward for him. Feeling confident about the potential results Ashley and Martin’s RealGROWTH<sup>&reg;</sup> medical hair regrowth program would provide, Giovanni was excited to begin.

After four months on the program, Giovanni was elated to see his hair was as thick and full as it used to be in his late teens. The changes were so impressive that his family had no doubt the treatment had worked for him and were pleased that Giovanni was being taken care of by both the doctor and hair loss consultant at Ashley and Martin. 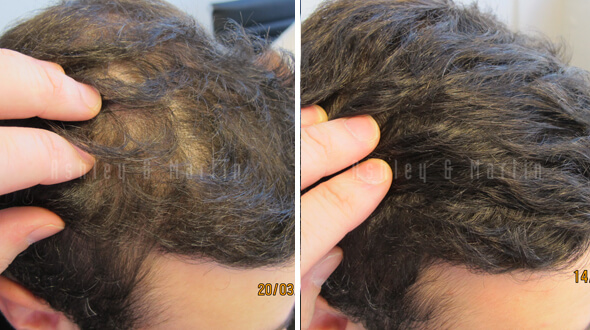