Under a great deal of stress after the recent purchase of his own business, Reyansh* attended his initial appointment with both his wife and his business manager. Both men were worried about their hair, and Reyansh had begun feeling a little low and concerned about the way he looked. Only 27 years old, Reyansh was not ready give in to the hair loss that affected the men in his family. He had been thinking about treating his hair loss for the past twelve months and concerned for her husband, Reyansh’s wife had strongly encouraged him to seek hair loss treatment. After finding Ashley and Martin online the couple had booked the appointment.

The hair loss Reyansh had been experiencing over the past two years was placed at a level I-II on the Norwood Hair Loss Scale and the consultant was confident that with medical hair loss treatment he would be able to regain the hair he had already lost. Both Reyansh and his business manager signed up for the treatment and his wife was given specialised shampoo and conditioner along with a hair nutrient complex to increase the health of her hair. Knowing he would be too busy to attend the clinic regularly for laser therapy appointment, Reyansh opted to purchase a home laser treatment device to go with the medication the clinic hair loss doctor would prescribe him. Finding a little time each day was much easier than trying to commit to a fortnightly visit to the clinic.

Loving that they were able to call or drop in to see the consultant any time they had questions or wanted to check up on the progress of his hair regrowth as part of the program, both Reyansh and his wife felt confident and well looked after. And as with so many of Ashley and Martin’s clients, when Reyansh looked at the changes that had taken place over the beginning of his program, he only wished he had come in sooner. 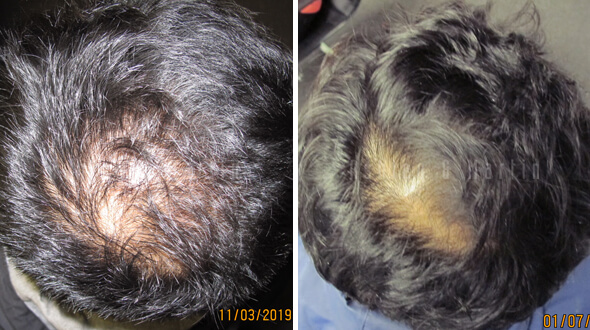