Assuming he needed a hair transplant to fix the fact his hair was becoming diffuse, 26-year-old Neil* called Ashley and Martin after finding us online. After three years of losing hair, Neil’s frontal hair line had become weak and temporal region had begun to show the beginnings of a deep recession in his near future. His father and grandfather both suffered similarly, but Neil was hopeful that a hair transplant would stop him having to lose his hair the same way.

Speaking with his Ashley and Martin consultant, Neil was surprised to find that the significantly more expensive hair transplant was not the course of treatment his consultant recommended. While the scalp examination, family history, and his good health confirmed a diagnosis of male pattern hair loss, the examination also confirmed something Neil was not expecting. Close inspection had revealed he still had a great deal of viable hair follicles that had simply failed to re-enter their growth phase after shedding and become dormant. With a combination of topical solution, and medication prescribed by the clinic hair loss doctor, together with supplements, laser therapy, and scalp hygiene products, Neil would be able to regrow his own hair without the need for invasive surgery.

And while Neil did not prioritise attending the clinic for laser therapy appointments or progress check-ups, he did perform his treatment routine diligently. Within a short space of time, his hair stopped shedding at the accelerated rate he had become accustomed to and the dormant hair follicles started to produce new growth, filling in his temples and thickening his frontal hair line. It was amazing to Neil how much easier and more effective regrowing hair was with medication than surgery. His friend had travelled overseas for a transplant, spending a considerable amount of time and money on the painful experience and was unhappy with the results in the end, but Neil had managed to regrow his own hair with barely any effort at all. 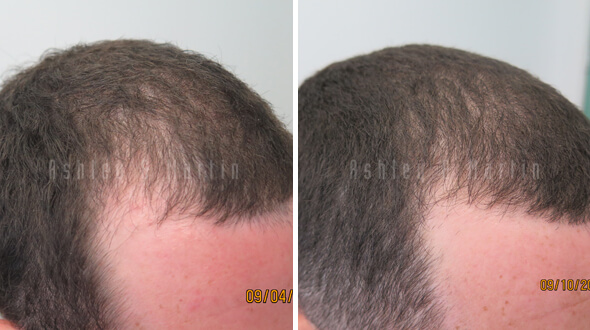