Keith* had tried prescription medication to fix his hair loss before coming to Ashley and Martin. And while he felt it had slowed the excess shedding, he was sure that something more must be able to be done for him. Reading about Ashley and Martin’s multi-faceted medical hair loss treatment online, Keith used the contact form on the website to request a call back from his preferred clinic.

At his first consultation Keith told his consultant that he had been noticing his hair loss for quite some time, but it was only in the last twelve months that he had really felt the need to do something about it. His grandfather was bald and his father thinning also; Keith wanted to avoid this for himself for as long as possible. It was causing him a great deal of concern over his appearance.

The consultant discussed Keith’s health and lifestyle to rule out other factors that may be impacting Keith’s hair growth cycle. Fit and healthy, a diagnosis of male pattern hair loss, Norwood IIa was given. The consultant explained that for Keith to reverse the effects of his hair loss, it would take an intervention strategy that involved more than one treatment. He had originally been on the right track with his treatment, but medical treatment needed to address the causes of his hair loss as well as promote growth from dormant follicles.

Four months after Keith had taken up the offer of a RealGROWTH® medical hair loss treatment program in his first appointment, he was sitting with his consultant again being impressed with the improvement he was seeing in his hair. He had not expected to see such an improvement this early in his treatment. His hair was fuller, healthier and he could see new hair filling in his temples. The 31-year-old was looking forward to seeing the changes that would take place further on in his treatment. 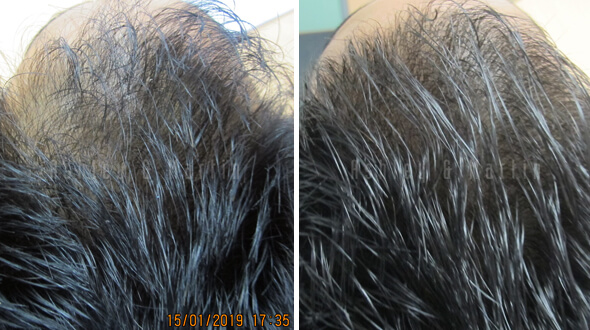