Why Low Dose Oral Minoxidil Treatments for Baldness Should Be Avoided

With such a large variety of hair loss treatments available, it can often be confusing to understand which treatments are recommended.

One of the treatments that has been proven to be effective is Minoxidil. Originally developed in the late 1950s it was originally used to treat high blood pressure.

It was first used as a topical treatment in the late 1980s, with nearly 40% of men in an FDA study showing moderate to dense hair growth on the head after treatment.

How does it work?

Minoxidil stimulates hair growth by increasing the flow of nutrients, blood supply and oxygen supply to the hair follicles by opening the potassium channels in the cell membrane.

One important factor to consider with Minoxidil based treatments is the need for continuous treatment. If you stop taking it, the normal hair loss process will start again and you will be back to your pre-treatment appearance in about 3 to 4 months.

If you stop using Minoxidil, the pores in the cell membrane will close or block resulting in a lack of supply of proper nutrients and oxygen to the hair follicles.

The natural hair growth cycle of your hair will start and your newly re-grown hair will shed away within 3-4 months. You will face hair loss again.

What’s the difference between Topical and Oral Minoxidil?

In addition to the topical treatment, Minoxidil has also been used as an oral treatment. Often this is a regular 1mg pill taken daily.

The 1mg Minoxidil oral tablet is a very strange product to use for the treatment of male pattern baldness. Oral Minoxidil tablets were used by Ashley and Martin briefly in the early 1990s when standard topical Minoxidil treatments were not strong enough to achieve a decent result.

Although 5mg treatments of Minoxidil have been somewhat effective in a small number of patients, there is little evidence of 1mg treatments being effective for male pattern baldness.

Take the case of one 37-year-old experiencing significant hair loss from Melbourne. 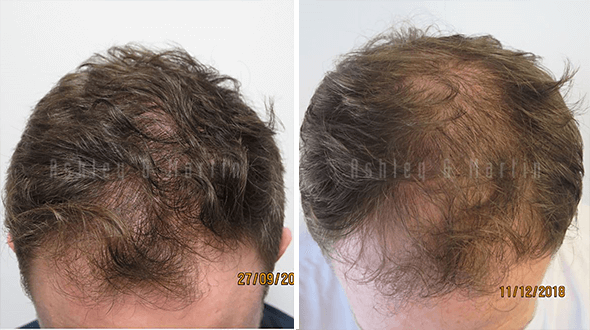 He saw Ashley and Martin on 27th September 2017 and then again 11th December 2018, we took photos of his hair loss status at those times.

Shortly after seeing Ashley and Martin in 2017, he saw another well known hair loss treatment company as well, and went ahead with a program of using a 1mg Minoxidil oral tablet with in-house laser treatment sessions with that organisation.

Unfortunately, the results in the photo taken when he returned to Ashley and Martin over a year later clearly show no improvement with hair density. In fact, he had lost even more hair during the treatment.

Side effects of Oral Minoxidil

Not only does Oral Minoxidil rarely work as hoped, higher doses of oral Minoxidil all too often result in nasty side effects that simply aren’t common for topical treatments.

These side effects include:

Not only that, because oral Minoxidil is not limited to the site of application, unexpected hair growth can occur all over the body, not just in your problem areas.

With the advent of new stronger topical treatments, oral Minoxidil is no longer a great choice for pattern baldness and has not been recommended by Ashley and Martin doctors since 1995

At Ashley and Martin, we know that not all hair loss treatments are right for every person.

We have a range non-surgical treatments that are specifically tailored to each patient’s needs by our highly trained doctors.

Book in for an appointment today to see what treatments might be right for you.